Stopping, or not stopping, in a moving walkway?

The unfolding patterns of mobility behaviour might be coded on the nitty gritty of how people feel and use their travel time, even in moving walkways. 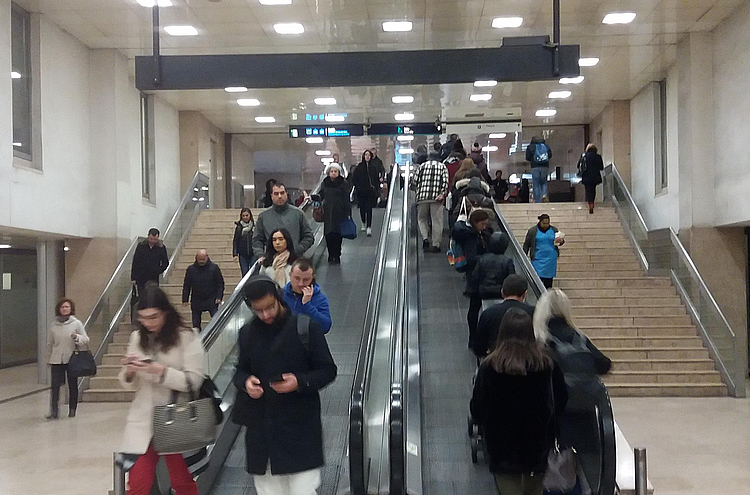 I was walking with my father from one metro line to another. In the corridor that connected them, we entered a moving walkway. After we filtered through people standing, my father grumbled: - "Why don't people keep walking?” He continued after the escalator that followed: - “Why do they just stop?".

The fact that some people were standing instead of walking made us have to walk in line, interrupting our conversation. Also, some people in groups did not stand straight in line and temporarily blocked our way, until they realized someone was coming and opened space for our passage.

At the time, I just shrugged my teenager shoulders and didn't comment my dad's grumbling, but I still remember perfectly what I thought: - "They stop walking because they can."

If you stop walking when you're on non-moving ground, you'll just stand there for all eternity. Unless you're a fakir and want to stay around meditating in the middle of a corridor of a metro station, that doesn't seem like a good option. So, if your intent is to get anywhere, you just have to keep walking.

On the other hand, if you happen to be on a moving walkway, you can stop; the floor is going to take you where you want anyway. You'll just take more time to get there. If you're unlucky, you might just lose the next train and have to wait a few extra minutes for the following one, but that’s all.

However, this observation didn't fully answer my father's question. Ok, people can stop on the moving walkway and still arrive at where they're moving to, but the question was why would they do it? If they can just keep their walking pace and get to where they want earlier, why would they stop at the expense of arriving later?...

Is this rational at all? Are they conscient of their choice? Why do some humans prefer to stand, while others chose to keep walking?

Maybe some people stop because they are tired or have some pain walking. In that situation it makes all sense to take a break. Elder people do this all the time, even when they are not in moving walkways. But this can't explain why so many people stop. Most people don't get easily tired or are in pain walking, but some of them still stop in moving walkways. So why do they do it? This is where the answer might unfold into infinite and mysterious possibilities.

Think of the last time you stopped in a moving walkway or rolling stairs. Why did you do it?

Was it because you were thinking about something profound, and took the extra effortless time to concentrate further on your thinking?

Or do you enjoy observing the faces of people passing in the opposite direction, and wonder about how their lives are like? Maybe observing new fashion ideas from what they're wearing? Or do you get carried to different landscapes as you look the advertising boards passing by you? Or maybe enjoying the fact of being carried without effort?

If you're talking to someone, if definitely gets easier to chat while standing still rather than walking in line on a moving walkway.

Or perhaps it feels unsafe to walk in an object that is moving, so you unconsciously stop and hold quiet and safe until it's over.

Standing on a moving walkway can also be a great opportunity to catch up with your smartphone's latest notifications. You might have time to scroll down a few posts.

The metro is not a good place for a phone call because of the noise, but moving from one line to another is an opportunity window.

I've seen people equilibrate their book while they walk to keep reading on the go. It’s hard to miss what’s next when you’re excited about the story. How much would they give to get a moving floor to walk them all the time?

With so many reasons to stand and seize the time, maybe we should turn the question around. Why would you not stop?

Obviously, if you're in a hurry to get to your destination, or you’re excited about what’s going to happen there, you keep walking to arrive faster and maybe still catch the next train. But that's far from being the only possible reason.

Children for example tend to run in the carpet or stairs. It's especially fun running backwards. I wonder how much the fun factor influences adults' decisions on moving walkways, even if our concern to show a proper behaviour stops us from running backwards or forwards.

Some people see their walking time as an opportunity to exercise. Stopping would just be a waste of steps for that daily step target. Reaching exercise targets means fitness and years of extra quality life.

Why does this matter anyway?

Isn’t it an evidence that it matters, that people take different decisions about the way they use their time use in moving walkways?

You might argue that most people don’t really decide anything. If they keep walking, it’s because they were doing it anyway. By default, with no apparent reason to change their behaviour, they keep going. It’s the act of stopping that requires a change of behaviour. They don’t really take a decision to do something different, so they keep walking.

Conversely, if they stop, it might be because they’re led to it. What's the likeliness of stopping if that is what people in front of them are doing? Do people simply copy behaviour? Thereby, most of the observed behaviour would not be a function of humans’ decisions, but the result of either their default behaviour or social influence.

Either we take a decision or not, our time at a moving walkway is a part of our lives. The experience which we face at different parts of our journey makes a difference in our mood and our perception of the trip. When using a moving walkway becomes a habit and expectation, people react negatively and tend to change mood if for some reason moving walkways are not working.

Transport suppliers may want to place many questions. Interchanges are known to be harsh on the perception of the passenger's own effort in using public transport. A given amount of time spent travelling in a single leg tends to be much better evaluated by travellers than the same amount of time in two different legs with an interchange in between. The interchange tends to cause stress and dramatically penalize the evaluation of the whole trip.

Should transport suppliers include moving walkways everywhere possible? Should moving walkways be wider, to reduce the unpleasant friction between standing and walking people than my father has felt? What about the surrounding colours and light? How does the presence of advertising affect the time perception? What if, instead of advertising, the time gap in a moving walkway could be fulfilled by a cartoon placed in the wall along the carpet and changing on a daily basis; how much would this everyday novelty affect the mood and excitement about a journey that might otherwise feel grey?

Like everything else, the devil can be in the details. The unfolding patterns of mobility behaviour might be coded on the nitty gritty of how people feel and use their travel time, even in moving walkways.

The MoTiV project is studying the value of travel time by following people’s travels and their feelings and actions along the way. Check it out. Share your thoughts below.

PS.: I couldn’t help it and went to that moving walkway where my father’s comment was triggered. I saw people showing many types of behaviour, which partly inspired this article. For 15 minutes during the morning peak time, I counted 239 walkers and 112 stoppers.