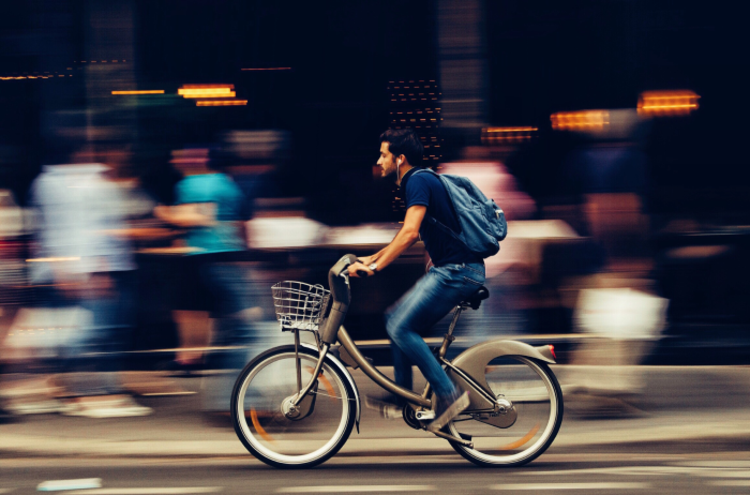 Pedro did it as a statement. He started cycling to work at a time when it was still something truly odd in Lisbon. As he passed, old men in the street yelled to him “GO, CYCLIST, GO” as if he were in the Tour. Car drivers honked “GET OUT OF THE ROAD”.

He believed that people should be able to use their bike to move around in the city, and he was that pioneer hero that gave the example to the future generations of bike commuters.

He also wanted to prove that cycling was fast, and so he started to chose the quicker paths even if they had heavy traffic, just to save 5 minutes. The less time it took, the better.

As the statement effect faded, he started noticing more the stressful part of it and the occasional sweat. He was so used to pedal hard that it took him a year to get used to ride at a slower pace. He came to appreciate the Dutch style, relaxed way of cycling. He chose again the calmer routes.

After having children, he took each of them to kindergarten and school before starting the 35 minute ride to work. The only alternative to do this was the car, and he started getting fed up of having no choices. “I miss it when I could go by metro and relax”. And so he took the metro whenever he didn't have to take the kids.

When his wife could again take the kids on some days, he recovered part of the pleasure of cycling, but he still felt it to be consuming his time unproductively. He had got used to taking his public transport time to think and read.

One day, as he was cooking dinner, Pedro decided to hear a podcast. He loved it and thought how much better this made his cooking time. He would learn things and hear stories from other people. He started enjoying cooking time.

It took him again another year to understand that he could do the same in his routine cycling time. His cycling routes became even more slow and long. Each 5 more minutes riding were 5 minutes of podcast pleasure.

Later, Pedro changed job and started working from home. His belly suddenly increased size, as he stopped doing the now 45 minute ride to work. Looking at his increased belly, Pedro realized that the cycling to work over the past years had kept him fit. He started seizing every opportunity (like going to meetings) to go by bike.

But his cycling time was about to improve even more. As his children grew up, he realized that the travel time to school with them were part of the best moments of his live. His children showed that they loved going with him, asked dozens of questions and told him about the latest news at the school. This made his cycling time more worthwhile than anything else.